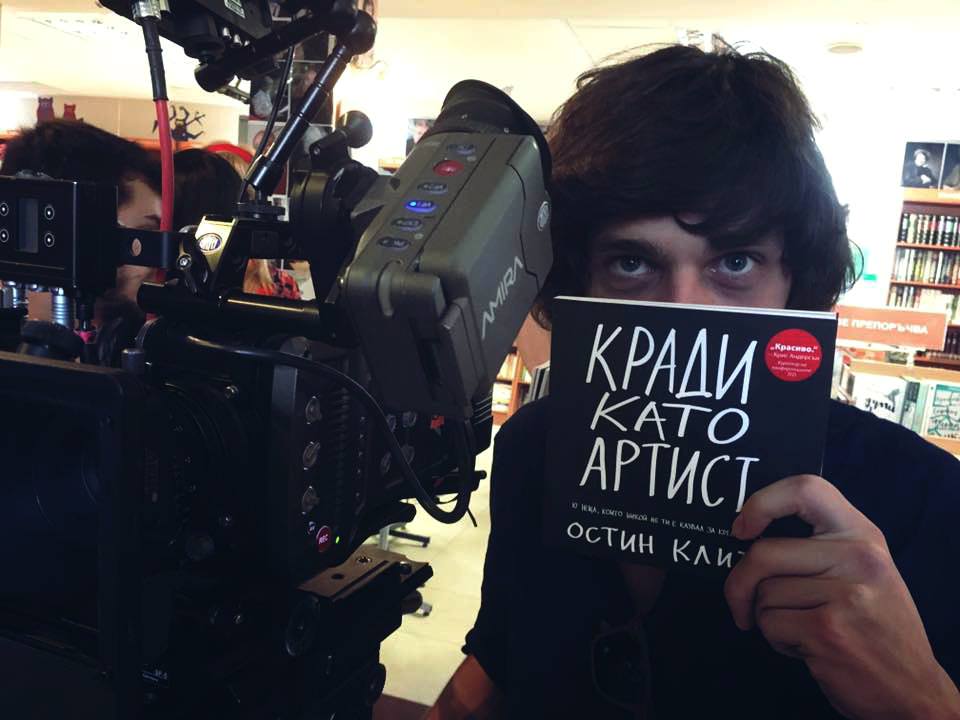 In your spare time: Spare time is boring and painful. I am constantly thinking about work. I want to work.

Favorite time of the day: Evening and night

Your motivation: Work and progress

Your inspiration: The world around me

When you look through the lens, what do you expect and hope to see: A better reality.

Is there a film which you watched without thinking how it was done, who is the DoP, who is the director:  In fact, most good movies. Somehow I managed to break myself [sic] and not think so much about it. When I look at a good story I just dive into it. Otherwise, you cannot enjoy it. But if I have to mention titles, they would be: “Last tango in Paris”, “The Dreamers”, “Amores Perros”, “Raging Bull”, “The lives of others”, “We need to talk about Kevin” and etc.

Which is the most memorable movie shot that you have seen: The shot where Rafiki rises the little Simba in his hands in front of all the animals of the kingdom.

If you can make a wish about something connected to your work, what would it be and why: Development. That’s the best thing about our profession. When I started studying, I wanted to use and work with the newest and the best camera equipment. I wanted to be on the set in every possible moment. I remember I couldn’t fall asleep all night before my first shoot with a professional camera. At first, I tried to take beautiful and flawless shots, but then I realized that this is not how that works. These are moments that take hours and sometimes even days. However, that is the most charming thing about our profession – you are always aiming for better.

I met Damian at 11 AM to have a cup of coffee and chat. Waking up was painful for him, because his day starts and ends a little later – the early morning hours are usually spent in researches for a new project and inspiring talks with friends. Evenings are his favorite. That is the most productive time for him, because the day has already passed. He has seen, heard and felt all for the days. What should have happened – happened, so now, at 8 PM  – everything starts to flourish around him.

When the camera was not there yet

His mom is an accountant and his dad – a driver. As he says: “no one at home does anything that is close to art”. When he started high school, Damian moved to Varna. He enrolled in painting classes and wanted to study interior design. “I have no idea why I wanted it and what was I thinking at that moment.” In his crazy-early teenage years, he had an unexpected encounter which destined his way without him realizing it.

One evening a friend of his called. It turned out that his car broke down and he didn’t have a place to stay for the night. Damian invited him over, they got a couple of beers and sat to talk. Suddenly, his friend told him the place he was working at needed new employees for the summer and suggested that he should arrange a meeting with the manager of the company. On the next day, Damian went to meet him. They quickly liked each other. Several days later, Damian found himself in a bus full of people and a single camera (that he hadn’t seen before). It was a company that filmed tourist trips – a big sensation around the seaside. They told him: “Just act normal and professional. Pretend that you know and can do everything.” They made up a story about his starlet biography of a young, talented and wanted director of photography, which they were telling the tourists. At that point, Damian had no idea what was going on….

That was the first time Damian saw a professional camera and he liked it a lot. But the interesting thing here is that the camera seemed to like him back. Do we have love from first sight here?

The summer was over and so was his summer job. Soon after he came back, Damian decided to get a camera and start shooting. He shot in abstract, detailed shots, most often black and white. He seemed to enjoy that quite a lot and shortly after, he bought a film photo camera and turned his lodge into a laboratory. Damian turns his days around in order to improve his photos. I suspect that was the moment when the evenings became his favorite part of the day. He started waking up early, or stays awake, just to enjoy and shoot the sunrises and sunsets.

After he finished his studies, Damian decided to come to Sofia and apply to NATFA. He was struggling with making a choice – go for Photography or Film & TV Cinematography. He decided to apply for Cinematography, but did not get accepted from the first try. However, that did not stop him chasing his dreams. Damian spent a year in theoretical training and practical experience and he got accepted on his second year. During that time, he made several photograph exhibitions with friends in Bulgaria and the USA.

After he got accepted in NATFA Damian started to get into details, related to the profession and the working process. He met new friends that share the same passion as he does and his adventure was ready to begin.

The world around Damian inspires him, he says. He gets motivated by work, development and progress. When he has free time he doesn’t know what to do. He wants to work, to think about work, to talk about work, to watch movies, videos and all sorts of pictures.

At first, Damian wanted to follow the good professional examples, but never succeeded. His experience has shown him that it is always different. If you always use your own imagination and intuition, it will be better than copying somebody else’s work.  There are many DoPs that he likes. Some of them are Ryszard Lenczewski,Bruno Delbonnel , Sean Bobbitt, Hoyte Van Hoytema, Roger Deakins, CBE, ASC, BSC, Vittorio Storaro, A.S.C., A.I.C., Sven Nykvist, Emmanuel Lubezki, A.S.C., A.M.C. and others.

When he talks about them and their work, Damian payed specific attention to Lubezki. He admires his work. I could even say that a little flame blazes in his eyes – he is amazed how, in so many different stories, Lubezki can implement his own and unique approach, and how difficult it is. When asked to recommend three films that could be used as an example of cinematography masters, he gave the following:

As it happens to the majority of men – Damian gets disappointed, but not in the typical way. He does not blame someone or something – the lack of money, the system or the government. His disappointment is somehow romantic, poetic and related to the work. There is a particular line that brings him this feeling: “Very nice image, but the movie sucks.” At the beginning, while he was still studying, it felt flattering, but soon that sentence started to disappoint, upset and hurt him. Damian realizes that these words do not make sense, because a film is combination of all – it is neither a single picture, nor just a story. He believes the relationship between the director, the operator and the art director is extremely important. As you are working on a project together, at one point the communication becomes natural and casual. You soon realize that you have a new friend – the person with whom you stand shoulder to shoulder behind the camera. Therefore, in times of difficulty, it is best to unite with your team. He believes that the true magic comes when the entire team unites and starts working as one.

We talked about the challenges as well. Damian says that before the start of every project he has a “pre – fever” – that fluttering feeling between embarrassment, anxiety and pleasure. A great challenge for him is to fight off the fear at the beginning of each project and to turn it into adrenaline when the filming starts. Another serious challenge is not to imagine anything when you get the script.  He thinks he should not use one of his strongest weapons – the imagination. Lately, he has been trying to do it more and more often. When he receives a script, he reads it as a text, as a playwright, and he abstains from his ideas and where his mind and vision lead him, because it often takes him to places different to the ones that the director has in mind and that does not lead to anything good.

His work in a word‍

To be honest with you, when I asked this question, I got a straight-forward answer: “I won’t answer you that. I can’t. It’s impossible. How can I describe it in a word?” Without any special claim, however throughout our conversation, he clearly defines what the DoP’s work is for him.  It is a combination of talent and intuition. That’s it. It’s just that simple.

I am telling you, this boy is a combination of good values, sanity, camera, imagination and a smile.

I would call this talent and intuition. What about you?